Located in Solok Tambun, Ipoh, the extension of this residential project mimics the typical space of a Malay traditional house, namely the anjung and the serambi gantung.

Traditionally, the anjung acts as a focal point for the entrance. A place to entertain unfamiliar visitors and guests. In private, the anjung allows for the house occupants to rest, chat and watch the goings-on and passers-by on the street. With this idea, the front porch allows visitors parking, while allowing its adjacent space for guests to be waited before entering further to the house. Such space is well sheltered and fragranced of Frangipani flowers and other low shrubs.

The serambi gantung (hanging veranda) is transformed to the rear veranda where most guests are entertained. The lower level of the rear porch allows for heat ventilation and good views to the rear pool. From the rear veranda, one enters into the living space, which is the core area of the house. This is the largest area in the house where most activities are conducted. Sleeping, eating, entertainment, ironing, studying and even feasting (kenduri) are held during marriages and other festivals. The importance of the living space is expressed with it centrality and its connection to the kitchen, where it is believed food brings family together.

Surrounded by hanging and low lying plants, clean air is brought to the visitor walking to the rear veranda.  As the hanging plants retain the pouring rain below the shelter walkway, the low lying shrubs sustain the soil stabilization from water loss and erosion, before excess water is poured to the perimeter pebbles and drain. The party fencing wall is made lower along the veranda allowing interaction between neighbours. The airy space of veranda creates welcoming sense to the guests and feeling comfortable to have tea while enjoying landscape.

With seniors forming part of the residence, the veranda is levelled with fall to the perimeter drain. Careful consideration of detailing allow Rain Water Downpipe to be concealed under the Hollow Section Column down to the perimeter drain, keeping the veranda neat.  Instead of staying indoor, the veranda encourages outdoor activities between the sporting grandkids and the gardening adult and grandparents, making a gathering space for the entire family members. The shades created opportunity for variety of plants planted under shed for the hanging ferns and orchids.

Thus, a ring of covered walkway is created, connecting the front porch (anjung), rear veranda (serambi gantung) and the side walkway. Extended at least 9 feet from the external wall, the outdoor activities are protected from the weather and the scorching sun.  Acting as a 9 feet owning, the internal space on the ground floor is further deterred from the heat absorbed by the owning roof. Water feature is introduced to the landscape to create tranquillity through its beautiful variations as a common conversation with visitors.

Whilst the existing house retain much of its former design, its extension relook into the typical space of the Malay traditional house to create a lively space for the residents, along with meaningful relationship to its visitors and neighbours. 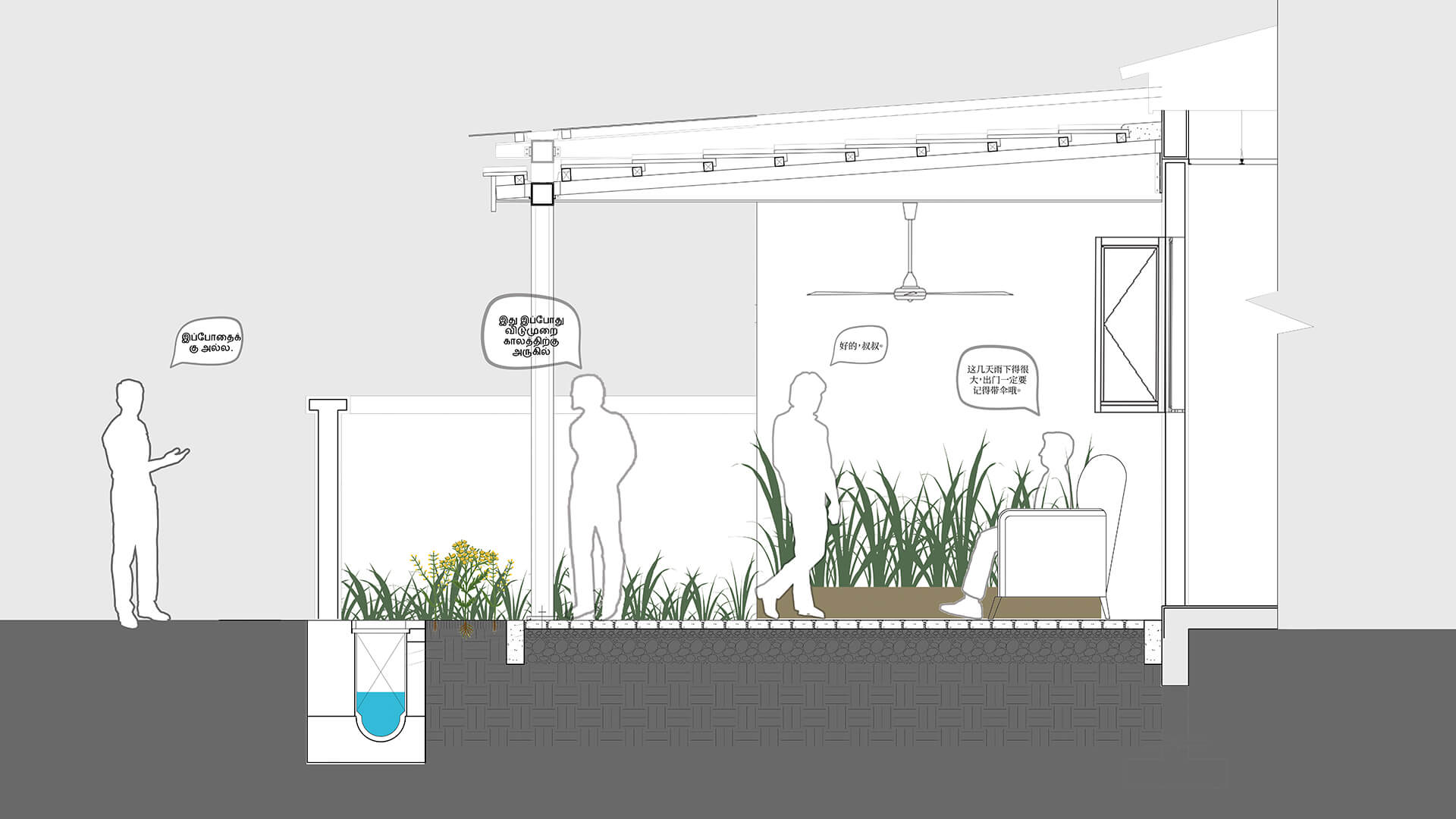 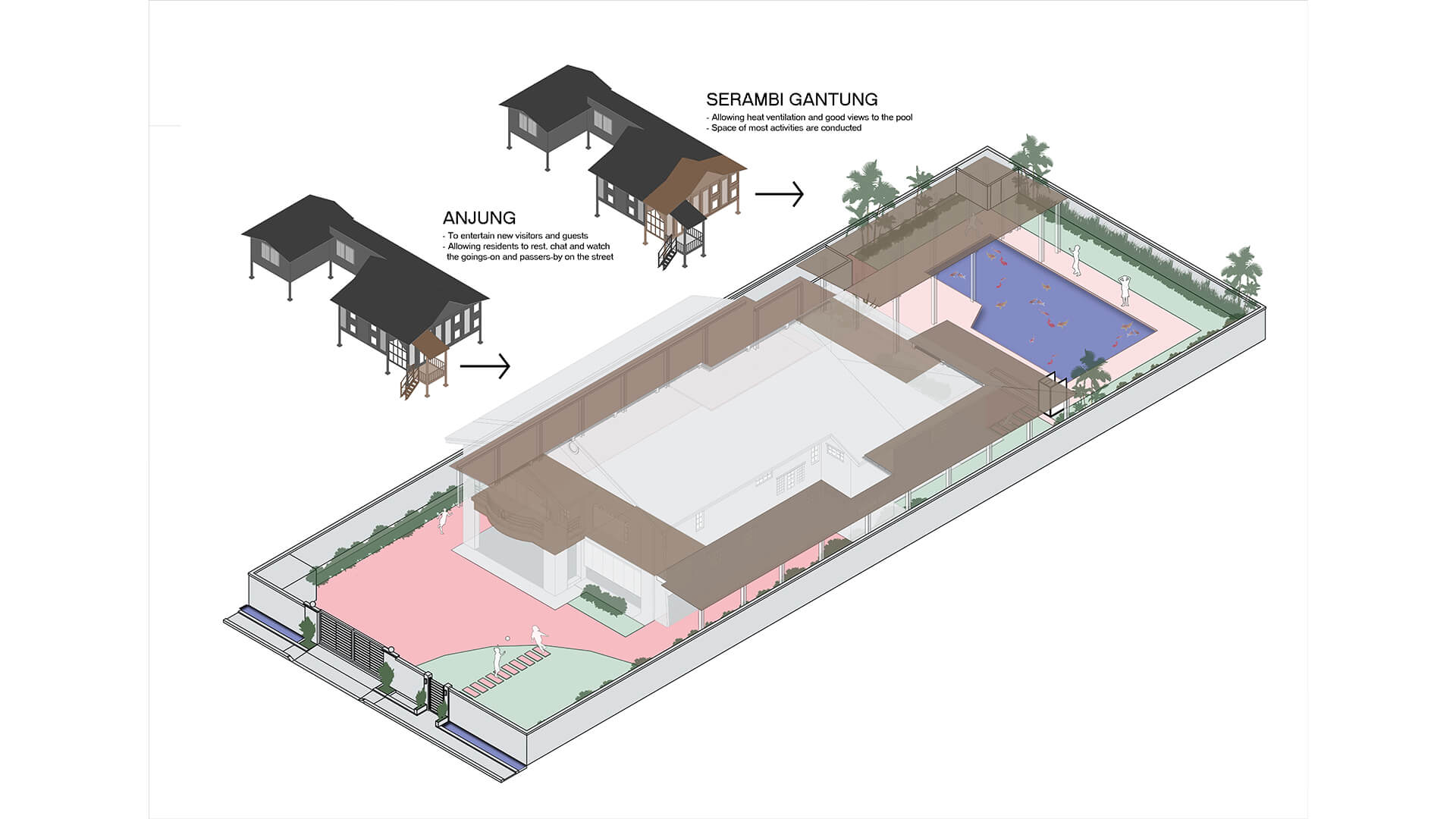 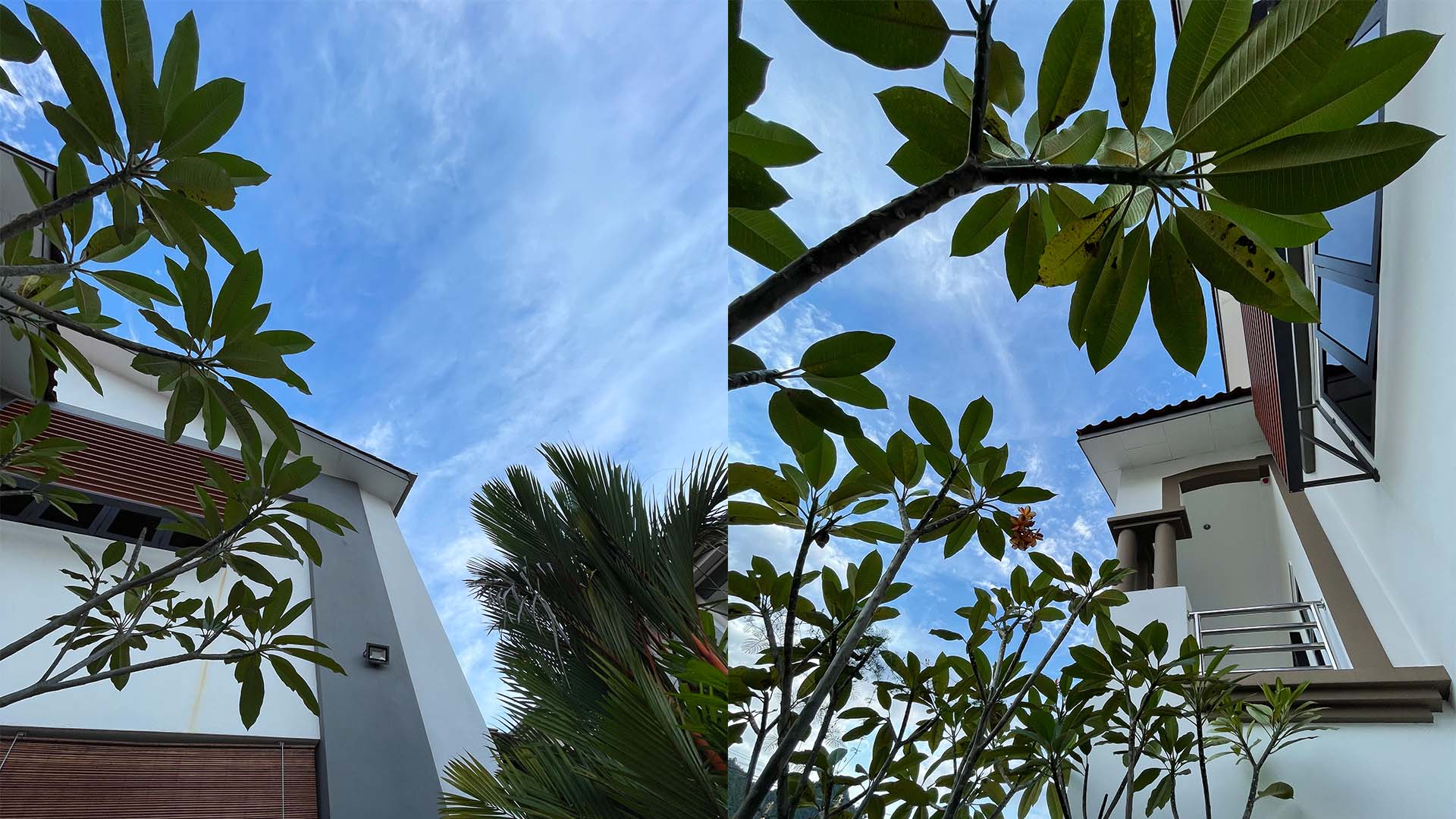 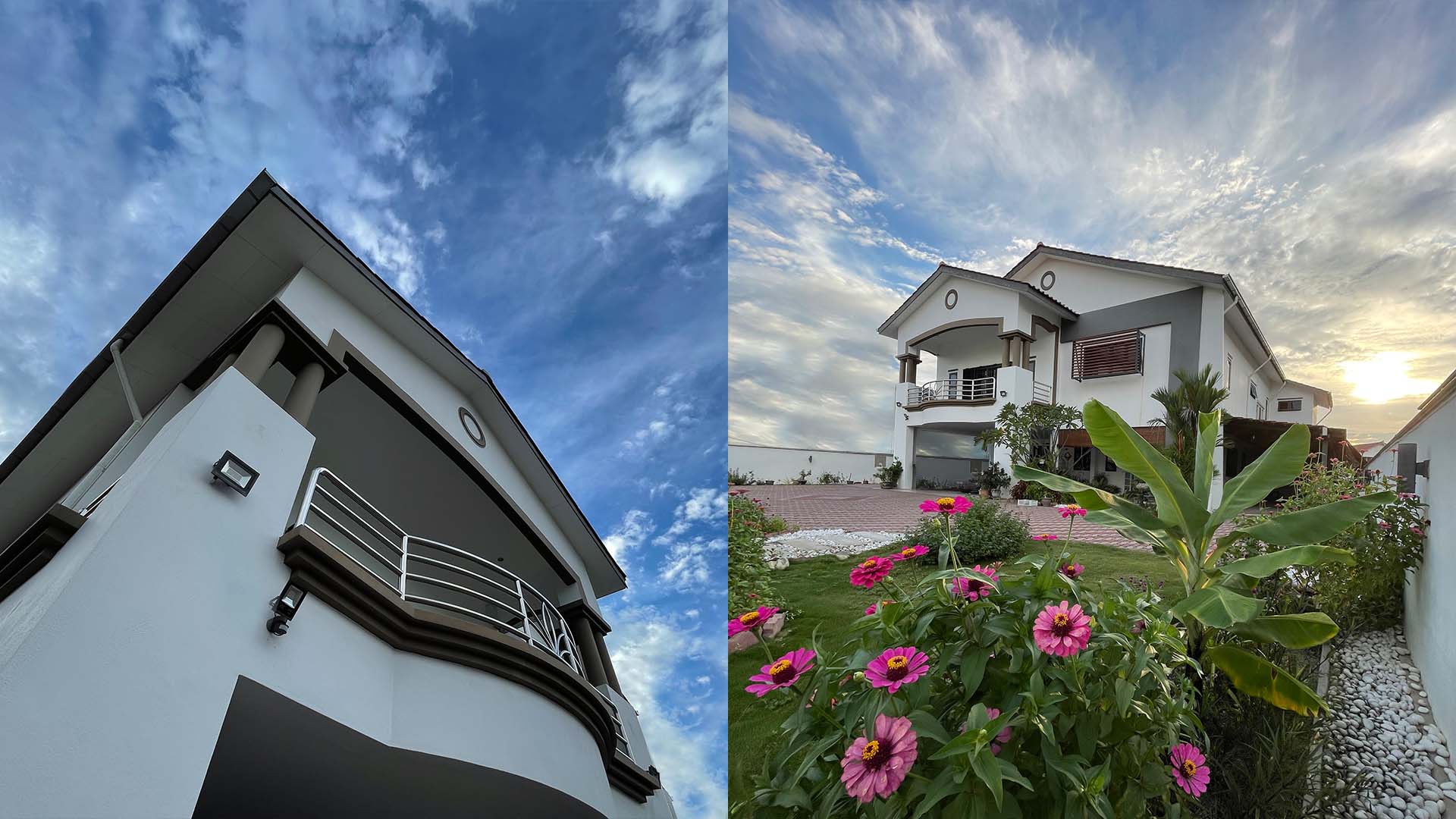 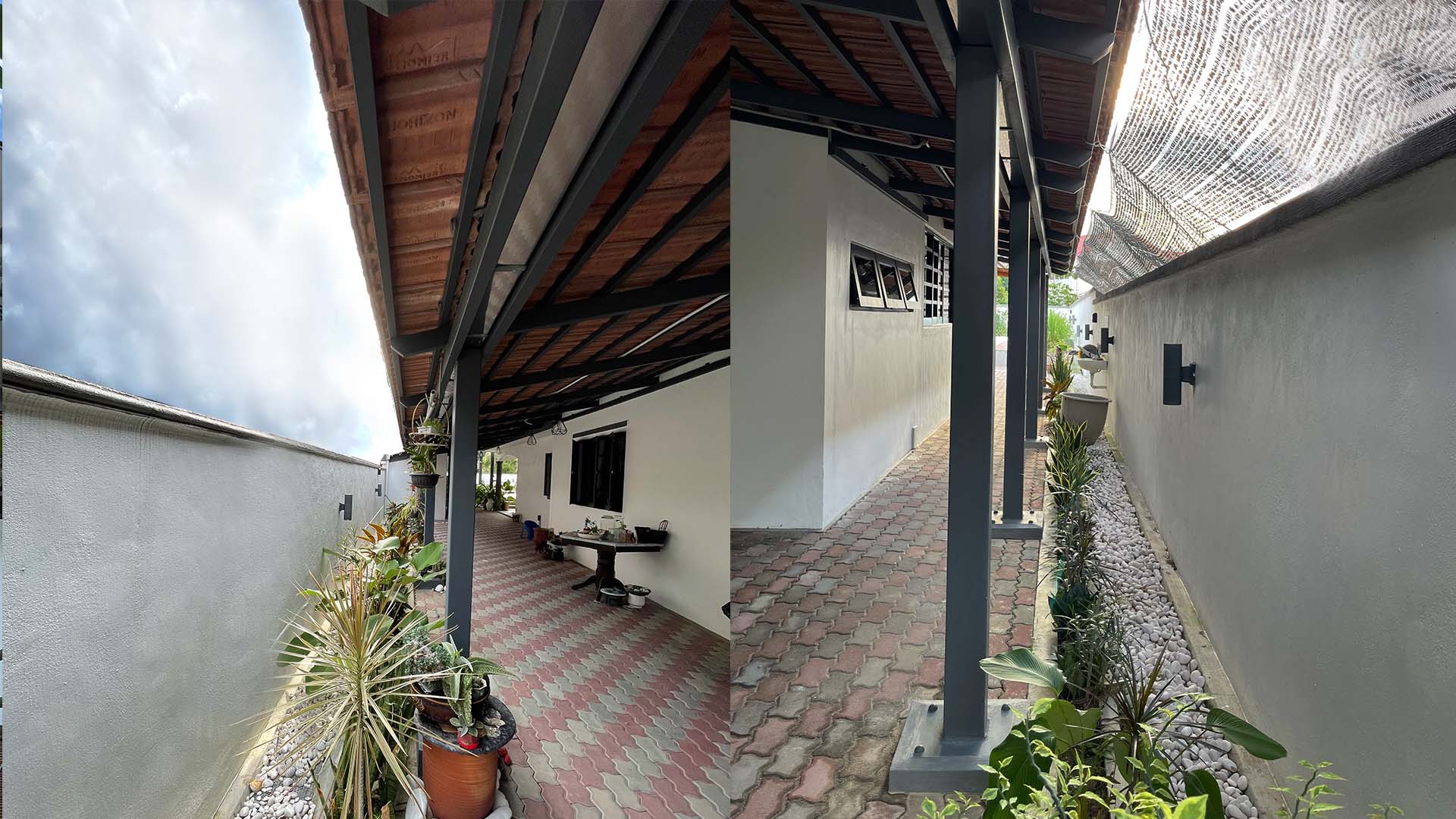